DIA was started because of a gap to be guided specifically in drawing at the master's level. Such a master's program did not yet exist in the Netherlands. At the same time, interest in contemporary drawing has grown among both young and older artists, as evidenced by the overwhelming number of applications for the DIA-master's program.

Broad public interest in drawing exhibitions has been evident in such major presentations as Into Drawing, All About Drawing, Sense or Drawing and The Line Up. Art fairs such as Art on Paper and Amsterdam Drawing demonstrate, with ever-growing public interest, that interested parties are closely following the latest developments of work on paper and collecting drawings. In September 2019 could DIA present itself publicly at Art on Paper. During this fair, but later also in Museum De Pont, artists made intensive use of the opportunity to discuss their portfolio during aDrawing Date . High time, therefore, for a master's program in which professional artists receive personal guidance.

The fifth master's program of DIA will start in September 2023. Application is open until July 31, 2023. 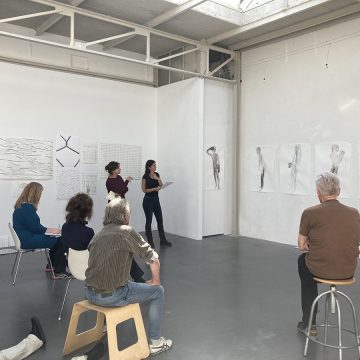